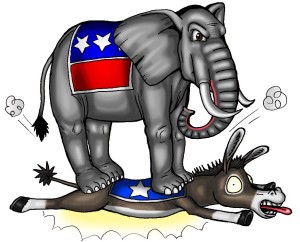 The election night is past, the smoke has cleared and Washington has a new change of guard. Half our tribe is sad and the other half is glad. Millions are hopeful, while the losers are questioning their rejection. Before you who voted “Republican” get too carried away, let me offer a word of caution.

Having just come out of Halloween in which American parents taught their children to celebrate and poke fun at evil, it makes one wonder if we really know what is going on in the land of the free and home of the brave. This land where we celebrate ghosts, ghouls, and goblins, but we cannot use the name of Jesus in public discourse or even allow him to be invited to his own birthday party.

So, from this culture we send our sons and daughters to Washington, somehow thinking they are not like us and can save us from ourselves! Who are we kidding? You are self-deceived if you think this new bunch of Republicans are really any different from those already there. I too, voted against the Obama liberal agenda, as did millions of others who repudiated the Democrat platform. But I am not naïve about the outcome.

I do not think this new tribe of politicians are our salvation. No, not at all. The best I can tell, the only Republican that actually ran his senate race on his platform was Ed Gillespie of Virginia. He told his state what he was FOR and what he would DO. He was defeated. The rest of the RED tribe got elected by simply being against Obama. So, we have guys (and a few gals) in office who got there by our vote, without a platform! Amazing!

Where then does this leave us, the people? The new guys in charge have yet to tell us what they plan to do in making the USA a better, safer place to live. They were elected mostly because the country was rejecting the other guys.

I tell you this, my hope is not built on a politician, regardless of who he is. Washington cannot save us- our salvation as a people is only to be found in a spiritual revival that sweeps this land from sea to shining sea. I pray let it begin in Washington. May God so work in the hearts of our leaders that they lay selfish ambition aside, and become the statesmen God calls them to be. I would settle for just a small minority in the halls of Congress who would not compromise truth for party, for lobbyists or personal gain. Pray with me for the few of “David’s mighty men of valor” who cannot be bought, silenced, or ignored until “In God We Trust’ is once again our creed.

God Bless America as we bless you by honoring your Holy name!